The following Chinese laundry detergent advertisement has caused global outrage and is increasingly being branded the most racist commercial to be screened this year.

What happens here really leaves one wondering why Chinese authorities haven’t so far noted anything wrong with this commercial.

A Chinese lady is doing her laundry when a black man with paint on his face walks in.

The two look at each other suggestively before the lady invites the man as if she going to kiss him.

She instead puts a tab of detergent into his mouth and shoves him into the washing machine.

Yes, that’s exactly what she does and sits comfortably on the washing machine as she waits for the outcome.

In fact it is here that things get really weird. The black man who was put in the washing machine comes out Chinese. Yes, a fair-skinned Chinese man.

It is strange that this commercial, which has been running on television in China and shown at cinemas for over a month never caused much of a furore. What do you think about this commercial? 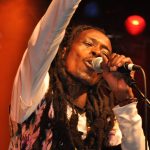